The Rise of Cal Pla 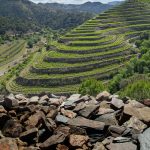 In the southwestern corner of Priorat, Cellar Cal Pla can be found in the village of Porrera. It is the largest village and is considered to be more temperate than other villages in the area, due to its location in the valley, carved out by the Cortiella river and the advantage of having of north-facing vineyards sites.

Cal Pla is owned by Joan Sangenís who is descended from eight generations of local farmers who cultivated various crops in Porrera. His family first started making wine in 1814 and until 1996, they sold their wines in bulk to the residents of the village. In 1988 Joan’s parents, who both still tend to the family’s vines, purchased Mas d’En Compte which gave them scope for expansion. The Mas ( an old farmhouse) came with a ancient, ruined house in the village which they renovated with the intention of estate bottling their wines.  Whilst Joan finished his studies in Oenology, his parents undertook the huge task of restoring the vineyards which were in  disrepair. They brought the old vines back to life and planted new ones with the aim of establishing Cellar Cal Pla. 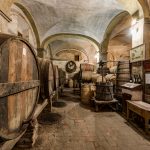 The family work with 20 hectares of vines around Porrera, where they vary in age, from 15 to 80 years old. The oldest vines are in the Mas d’En Cacador vineyard which produce Garnacha and Carignan. These vines could be described as the ‘grand cru’ of Porrera. Due to the location of the vineyards (terraces) and a steep incline for some of them, farming is hard work but the the warm, dry climate lends itself to farming organically. Indigenous varieties are mostly grown here, such as Garnacha Blanca, Xarel lo, Picapoll Blanca, Macabeu and Moscatel for the whites as well as Carignan and Garnacha for the reds. The estate also grows Cabernet Sauvignon.

We have five wines from Cellar Cal Pla and we urge you to try them. They are very typical of the Priorat region and vary in style. You can find all five wines in our online shop.